Gun's E-Z Own: What NOT to do around your TV

You may have heard the Jim Croce Song with the lyrics, "You don't tug on Superman's Cape, you don't spit into the wind, you don't pull the mask of the old Lone Ranger and you don't mess around with Jim."

Well today I have three stories of what you shouldn't do around your TV. Another title could be: Kids, don't do this around the TV to anger your parents.

One our customers came into the store very upset. We asked what happened? Her 11 year old son was playing with his BB gun. (Oh, yes. You already know the ending) He was cleaning it and pretending to shoot it. He had thought it was empty. (Of course it was empty.) He had moved to the living room and placed the BB gun down.

While placing the BB gun down on a table, the BB gun was pointing towards the TV. His finger got stuck in the trigger and bang. Cracked TV screen. A TV that was less than two years old.

Needless to say, BB guns are now banned in the house* 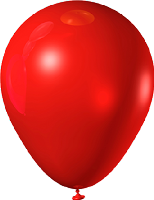 An family member recently went to a local home improvement store, who were handing out helium filled balloons to all the kids. To help weigh the balloons down, the balloons had a washer tied to the bottom of the string.

The daughter got home and was so excited about her new balloon, she was swinging it around and around in, . . . you guessed it, . . . the living room. Her father told her repeated times to stay away from the TV with the balloon. She lost hold of the balloon and it floated over the TV cabinet. Now the TV sits in a TV cabinet where the doors can close over the TV.

Thinking the daughter couldn't get to the floating balloon, the father who had a broken foot in a cast at the time, decided to take a long hot bath. Being as that it was easier than taking a shower.

After the bath, he entered the living, hmmm, the ottoman was by the TV cabinet and the TV cabinet was closed. Odd, but ok, He opened the cabinet, sat down, used the remote to turn the TV on and HOLY CRAP, there was a rainbow colored, spider web patterned crack in the TV screen.

A loud, "Get over here now!" to the very upset and nervous daughter was called out to found out what happened. She pushed the ottoman to the TV cabinet, that was open, climbed up to get her balloon. In the process she banged the washer into the TV screen. She got scared, closed the TV cabinet to hide the damage and ran away to her room.

Moral: Never assume that your determined child CANNOT do something. Especially when it comes to cool balloons.

A customer's daughter enjoys the scented candles. On this particular day, she had lit a candle on the TV stand. Of course the TV is sitting right by the lit candle. What happens to candles when lit? They melt and while still warm there can be a puddle of wax.

The daughter was being responsible, didn't leave the room while the candle was lit, but when she was ready to leave the room, she picked up the candle to blow it out. She lifted the candle up, in front of the TV, took a deep breath and (Yes, she did) blew the candle out and blew a bunch of hot wax onto the screen of their new TV. The hot wax melted spots into the screen and the spots that didn't melt, left a mark from cleaning it.

Moral: Wax on not so easy to wax off.

At the time of the incident it's not so humorous but these are memories that we can look back on and smile about.  Remember that time when . . . broke the TV? Yea, how did that happen again? 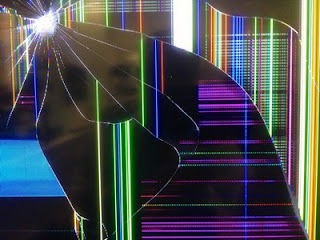 Ladies and gentlemen, I am more than happy to sell you TV's, but if you like to save some money you don't play with a loaded BB gun, you don't swing a balloon with a washer on the end, you don't blow out a lit hot candle into your new TV and then you don't have to visit Gun.

*Just a side note for Story #1. A few months later, That boy's older sister, by 4 years, decided to play with the BB gun in the house and blew out the glass window of there stove. Face palm here.

I hope you enjoyed today blog. Please remember to view our Facebook page and visit our website at gunsezown.com.

Have a safe and blessed day. And if I don't blog before then, Have an awesome Thanksgiving.

Here at Gun's E-Z Own, because that we are giving loans out for our customers to purchase furniture and using that furniture as collateral, we must do collections. That is we call customers, we send notices and letters to customers, we door knock customers and we take customers to court and get Sheriff's replevins (legal term for repossession).

I have been doing this for almost 20 years. (20 years in Feb of 2017) and dealt with all types of customers when it comes to collections. Today, I am going to do an overview of what Gun's E-Z Own does when out and about door knocking.

You may have noticed that I said Door Knocking. That is the phrase we use when we go to a customer's place of residence and, wait for it, . . . knock on their doors.

In the great state of Minnesota, there are laws that allow finance companies to do "self help" repossessions. Which in turn means, we are allowed to go up to customer's doors and ask for payment or the property. This does NOT mean we kick the door down and break in. Which, to be honest, I would like to at times. But I don't and won't. First off let me say that we reserve door knocking for those customers who refuse to call us back or make a payment. So if a customer has been contacting us we don't go to there doorstep unless they just have not come through with their five broken promises to pay us.

And when we door knock, it is not nearly as exciting as what you see on TV. If the customer can't afford their payment any longer, they are more likely to give up that Sofa. Those guys on TV repossessing a car if a different story. Take away a person's car and you pretty much take away their lively hood.

When going to a customers home, I always look at (not into, because that would just be creepy) the windows to look for curtain movement and listen for sounds for someone moving around or maybe a TV on. We look at the surroundings to make sure someone is still living there. Why is that? Because we have people move on us and we want as much information as we can get.


We also have to look out for mean dogs. Most of the dogs are friendly and I can get them to settle down and maybe pet them. Maybe. 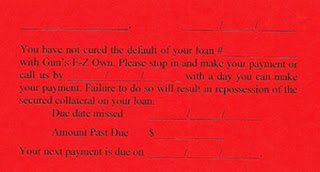 From there I have a little carrying case that has my notices and envelopes in it. I knock on the door and listen for movement. I love it when the dog inside goes off on protecting the home. Then I know if the customer is home, they can't say they didn't hear me, because that dog will wake them up and/or let them know someone is there. If I don't hear anything, I will knock again and begin writing out what I need to on the notice. As you can see we use two different notices depending on how far behind the customer is. We have created a fill in the blank notice that makes it quicker and to get the legalize wording correct every time.

So then if there is still not anybody answering the door, Like Sheldon Cooper of the Big Bang Theory, I knock a third time. At that point I will leave the notice in an addressed envelope on the door knob or something that will hold the envelope.

Now if you are using this blog for help hints, DO NOT leave the notice in the mailbox. That is a Federal Offense. Just don't do it.

Once I hang the door notice, I just go back to my vehicle and head off to the next door. But what if someone answers the door?

If someone answers the door, I politely ask for the person I wish to speak to. If they are not home, I introduce myself and leave the door notice in an envelope with that person.

Now if the customer is home, I have a cordial conversation with them, and let them know why I am there. (They already know) Sometimes I get a payment, sometimes I get the property, sometimes I accept a promise of payment. Each situation is different.

The key to face to face collections is to treat people with respect. Everyone has a bad month. Bad things happen like car accidents and surgeries. If you poke the bear, all you get is a big load of nothing, and angry customer who is still delinquent and now you are in a upset state. Life is too short to go down that street.

Just talk to the customer with respect and explain to them what the next step is if they don't pay you. There is no reason to get all up into someone's face. If things do escalate, remember DO NOT BREACH THE PEACE. If you feel you are going down that road, Just listen to Kelly Clarkson and Walk Away.

Once again I just gave an overview of how I handle door knocking for collections. I live in a small town and this works for us. If I were to write everything down, this blog would be about 10 pages long and you would have lost interest before the end of page one.

I hope you found this interesting. Remember to find us on Facebook and visit our website at www.gunsezown.com for specials and see what we have in stock.

Have safe and blessed day.